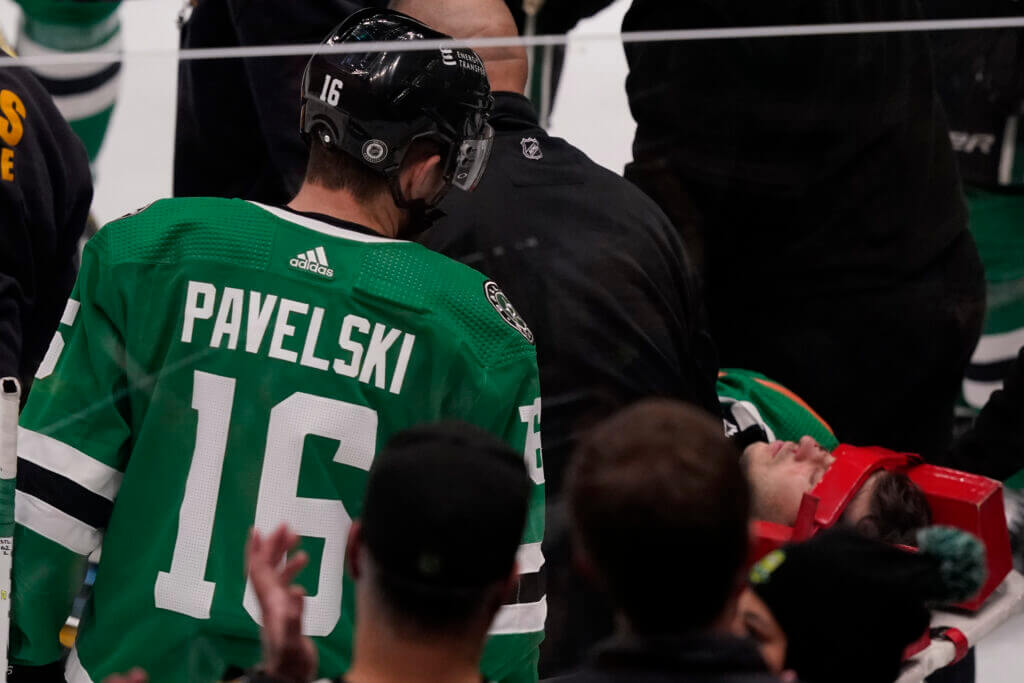 Typically when I do takeaways pieces, it’s easy to pick out three. Wednesday night’s game was one of those rare occasions where there was really only one talking point to discuss from the game. Well, two. But only one of them had a major impact on the game’s outcome. The Toronto Maple Leafs lost 2-1 against the league’s worst Arizona Coyotes, just a night after beating them in a shootout.

With Scottsdale native Auston Matthews making his first trip to the desert since Nov. 21, 2019, and former Coyote Michael Bunting facing his old team for the first time, there were already a couple of things that made tonight’s game worth watching heading into it.

Every once in awhile, however, the Maple Leafs will play an NHL hockey match that brings everyone down to earth. Last night was one such game. Here are three key takeaways from Wednesday night’s loss to Arizona.

Maple Leafs Don’t Have an Answer For Coyotes’ Vejmelka

The term “getting goalied” gets thrown around quite a bit with the Maple Leafs. Sometimes, they pepper their opponent’s netminder with lots of shots but no real high danger chances. That wasn’t the case in this game. If you missed the game and looked at the stat sheet, the shot totals look about how you’d expect they would. The Maple Leafs beat the Coyotes 46-18, but lost due to an incredible goaltending performance by rookie netminder Karel Veselka.

Vejmelka was a fifth-round draft selection of the Nashville Predators, 2015. Vejmelka had never before played in North America. In his debut NHL season, Vejmelka, a 25-year old Czechia netminder, has a record that is 3-13-1. He has a goals-against-average (GAA), of 3.18 and an save percentage (SV%) (.910. These stats are impressive considering how terrible the Coyotes have been this year.

And when you factor in how the Coyotes kicked off the season with an 11-game losing streak and how they didn’t score more than one goal in each of Vejmelka’s first seven starts, he’s made the best of a bad situation, all things considered. Tonight, he showed all of his potential. He not only kept the Coyotes alive for 60 minutes but also made some amazing saves to keep it close.

This isn’t even Vejmelka’s only start like this in the new year. On Jan. 4, he stopped 46 shots in a 3-1 loss to the Winnipeg Jets, further proving that oftentimes, he’s the only reason the Coyotes have a fighting chance. While you can make excuses and point out missed calls against Maple Leafs, in the end the Maple Leafs ran into the most hot goalie. It is important to look at the big picture. Games like this are bound to happen, no matter how great your team.

If Vejmelka didn’t stand on his head for the Coyotes, this probably would have been the main takeaway from the game. It’s always a fun game when Matthews gets to return to Arizona. Matthews’ family is always there to support him, as well as the fans. He also set a franchise record last night for the most consecutive road games with a goal. This was his ninth consecutive game.

Matthews was putting in a tremendous effort heading into the game. Matthews had scored 16 goals and 22 point in his previous 14 games. After breaking the ice with the Maple Leafs just 14 seconds into third period, Matthews added to his score. He clearly wanted the record as he was playing with an edge most of the game. It was almost poetic to see him break the record in his home state, with his family.

Matthews skated with Bunting on one side and Ondrej Kae on the other for the second consecutive game. He was close on many occasions, especially in the final minutes. Jason Spezza shot his wrist shot across the net, with the goalie pulling. Matthews buzzed more than anyone else tonight. And while he likely could have scored ten times, Vejmelka’s performance was his biggest obstacle.

When I say “burned,” I mean it in the sense that these two things got in the way of any chance the Maple Leafs may have had at pushing the game into overtime. While Petr Mrazek only allowed two goals, with one of them being a flukey bounce, he made a costly mistake on Arizona’s game-winning goal in which he missed a poke check on a 2-on-1, putting him out of position for Ryan Dzingel’s tap-in.

It’s possible that this would not have been as common if Mrazek had not made similar mistakes earlier in the game. Luckily for him the first time, Phil Kessel tipped the puck wide, and the missed poke check didn’t end up costing them. The same couldn’t be said for the second time around, however. This was his fourth start of the season, and he’s yet to have a game with a SV% over .900. It probably doesn’t help that he hasn’t seen any game action since Dec. 11 against the Chicago Blackhawks. He is a great player. Earn $3.8 millionAlthough Jack Campbell is a great player for a fraction of the cost, the Maple Leafs need Mrazek more than an average player.

The Maple Leafs outshot the Coyotes in shots and overall, but there were some sloppy moments that worked against them at crucial moments. They were 0-for-3 on the power play and couldn’t get settled in the offensive zone after they called a timeout with the goalie pulled and 90 seconds left in the game.

Maple Leafs’ head coach Sheldon Keefe wasn’t happy with his team’s inability to capitalize in these moments and even took it upon himself to question the team’s conditioning following the long layoff. They’re 3-1-1 in the new year, so clearly, it hasn’t drastically affected their ability to win games, but there has been a trend of flat-footed play in the past three games, and they haven’t always been lucky enough to get the wins with it.

If you asked me which team would beat the Maple Leafs in regulation after these past three games, odds are I wouldn’t have guessed the team who had only won three games at home before Wednesday night. But as we’ve seen all too many times with this team, nothing is out of the realm of possibility.

While losing in regulation to one of the worst teams in the league is never something you want to do, the Maple Leafs can’t dwell on this loss. They’ll be looking to bounce back against the 21-10-5 Blues on Saturday.

Alex Hobson is a third-year student at Niagara College in broadcasting. Since 2015, he has been writing about sport and has been with The Hockey Writers (October 2020). He covers the Toronto Maple Leafs as well as the World Juniors and the NHL Entry Draft. He also participates in the Sticks in the 6ix Podcast presented by THW. He also makes weekly appearances on THW’s Maple Leafs Lounge Roundtable. For interview requests or any other inquiries, you can follow Alex’s social media pages listed at the bottom of his articles like this one.